NZ Landcare Trust in partnership with the National Wetland Trust has established a community catchment group focused on predator control in a wetland reserve outside the pest-free wetland sanctuary at Lake Rotopiko near Ōhaupō in the Waipā District. The Rotopiko Lakes complex is a 40-hectare site consisting of three connected peat lakes (North, South and East Lakes).

The Rotopiko Community Pest Control project has been designed to engage community volunteers, develop a suitable methodology, install a network of pest monitoring and control devices, and initiate regular vertebrate pest control. For the first three years (2016 – 2018), the project was funded through the DOC Community Conservation Partnership Fund and the Waikato Regional Council Environmental Initiatives Fund. The project is also supported by the Waipā District Council which have purchased and planted a buffer of land around the peat lake complex. The project has become self-supporting and is being run by community volunteers with assistance from NZLT.

The pest control work around North and South Lakes will complement the restored and replanted pest-free habitat around East Lake. The East Lake work is being undertaken by the National Wetland Trust as part of the planned National Wetland Discovery Centre, and together sits alongside catchment enhancement works being undertaken further down the catchment around Lake Rotomānuka by the DOC/Fonterra Living Water programme, and NZLT. 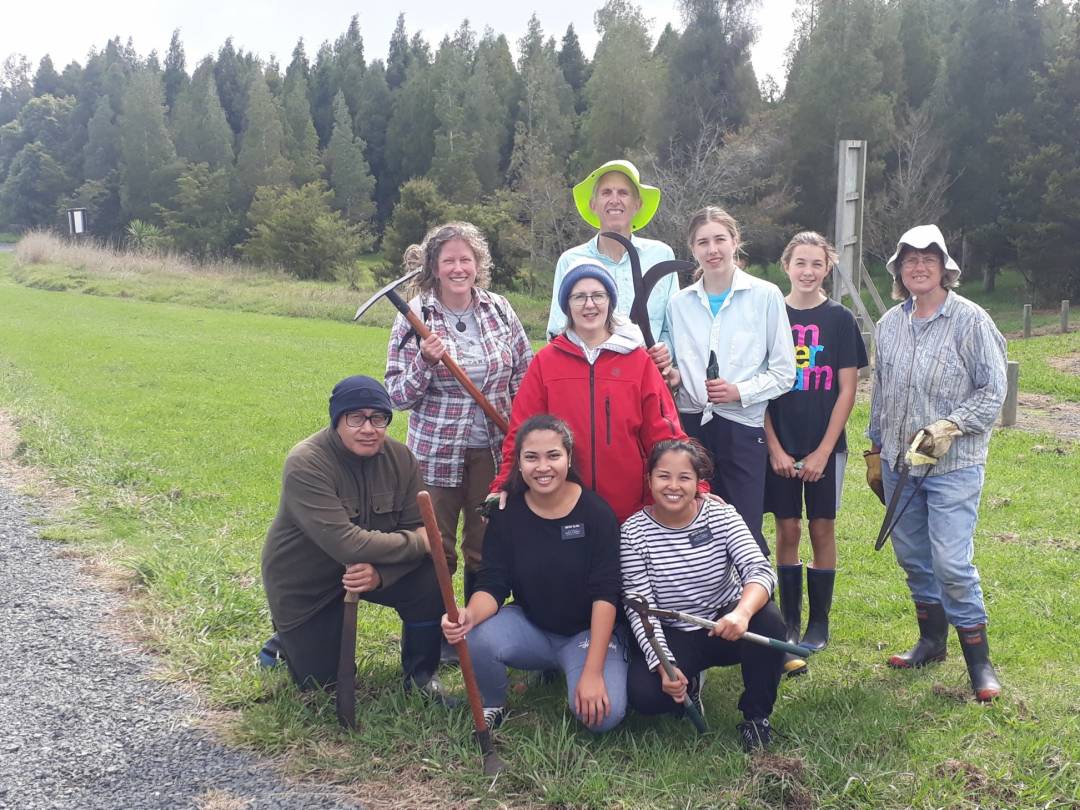 The numbers of pests killed by the Goodnature traps sits at 935 so far. This brings the total of mammalian pests removed by volunteer trappers to 1,853. 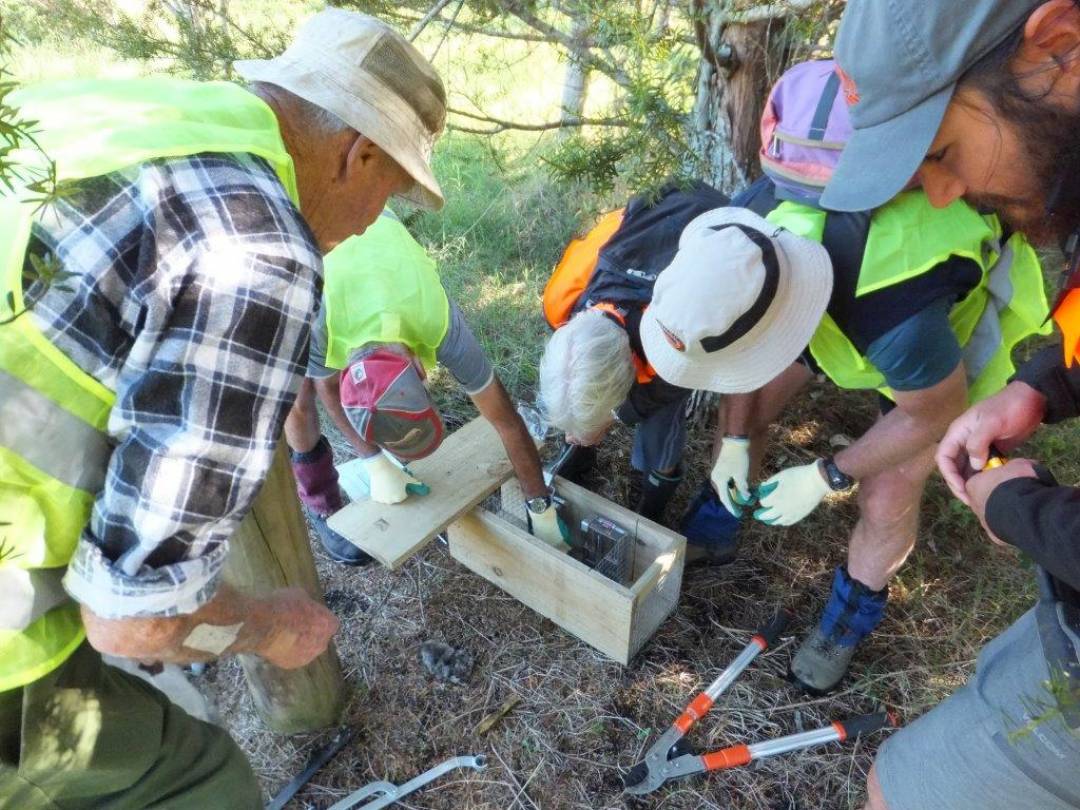 We are celebrating catching over 500 pest animals around South Lake this month. As at 14th June 2019, the DOC 200 traps have successfully caught 17 stoats, 14 weasels, ten ferrets, 254 rats (Norway and ship), 31 mice, seven feral cats, 12 rabbits and 137 hedgehogs. We have also caught 18 possums in the Timms traps bringing the total to 500. This doesn’t include the pest animals caught by the hunters around North lake, or the rats and possums killed by the Goodnature traps, so the number will be higher.

Our recently chew card monitoring showed no rats, possums and insects. Detecting a larger number of mice indicates our rat control is working, as rats eat mice, so as a general rule, if you have high rat numbers, you’ll have low mice numbers. Conversely, if you have no rats, there will be more mice in tracking tunnels and as seen on chew cards.

Our success was picked up by Stuff and you can read the article here: https://i.stuff.co.nz/waikato-times/life-style/113454710/pests-vanquished-in-their-hundreds-around-haup-peat-lakes

To complement the current trap network around both South and North Lakes of the Rotopiko Complex, a number of Goodnature traps have been installed. Goodnature’s are self-resetting traps – and there are currently two different types. An A24 which targets rats, and A12’s which target possums. The other traps around South and North lakes are DOC 200’s and DOC 250’s (for rats, mustelids, and hedgehogs) and Timms for possums, which are single kill traps, which need to be cleared, re-baited and re-set by volunteers.

As part of Conservation Week in September, Sam Gibson from Goodnature provided some training for the volunteer trappers around South and North Lakes on placement, maintenance and some interesting insights to pest animal movement. This training was open to the public and a couple of other trappers from different lakes also came along, as well as staff from DOC and WRC, so some good knowledge sharing took place.

In December 2017, a Christmas celebration was held inside the predator proof fence, with pizza and drinks for volunteers as a thank you for all their hard work. We facilitated a discussion around trapping methods with a couple of trapping experts brainstorming ideas to improve our trapping techniques. One outcome was to put a request to the local community for spare corks which we could use to soak in peanut oil as a lure for rats. The Ohaupo community supported our request and we now have enough corks to keep us going for a few years! Thank you everyone.

To celebrate World Wetlands Day on the 2nd February, a “Trapping for Success in the Peat Lake Catchments” was held in Ohaupo which many of our volunteer trappers attended. There were a range of speakers and many tips for improving catch rates were discussed. Trapping around both South and North lakes has continued over summer. We started baiting the Timms traps again, and are having limited success with corks soaked in peanut oil. The next thing we are going to trial is corks soaked in aniseed for the Timms traps.

Rotopiko was one of the lakes included in a recent predator control stocktake and waterfowl habitat assessment done across all of the Waipa peat lakes as part of a feasibility study to return pateke /brown teal to the Waipa district.

An exciting addition in our project has been the development of a track around North Lake, and the deployment of 21 DOC 200’s around this lake. These traps will be checked by the local duckshooters who use North Lake during the duck shooting season.

As we were not having much success catching possums in the Timms traps around the South Lake (only caught one in April despite all the bait disappearing), we decided to stop using them until we figure out a better system of baiting. We are also going to undertake a spotlighting exercise in the evening around the lake to determine if there are any possums living there. This will happen when the weather improves and neighbours will be notified via a letter

We have been working with DOC on moving our current trap catch recording system from a shared dropbox spreadsheet, to the on-line “Walk the Line” smart phone application that DOC have developed to record trap catches. This is still a work in progress, but we hope to move to this system over the next few months.

As at the end of June 2017 we have caught: five weasels, 119 rats. 83 hedgehogs, 8 stoats, nine mice, four feral cats and seven ferrets, since the project began.

In September 2016 we added 31 Timms traps around the South Lake perimeter with the aim of catching possums around the lake. However, despite an initial catch of a few possums we have only managed to catch thirteen possums in the Timms traps, and something (we assume rats) was taking all the bait from the traps without setting them off.

In February members of the ‘Menz Shed’ constructed 50 boxes to house pest control traps (double set DOC 200’s). On a sunny day in March around a dozen people, made up of community volunteers, DOC staff, and local landowners, positioned the boxes at 50 metre intervals around the South Lake, and set them for the first time using rabbit lure as bait. The location of the boxes was recorded on GPS by EcoFX staff. A month later, the traps were checked for the first time, and rebaited and reset where necessary. The traps have been checked on a three weekly basis since then. The group has been trialling different baits. In half the traps eggs and rabbit lure were used while the remaineder were baited with koi carp pellets sprayed with koi carp oil (which has a very strong smell!). As at July 2016, the DOC 200 traps have successfully caught one stoat, four weasels, 17 rats and 37 hedgehogs.

While the first three pest species may be obvious, not many people fully appreciate the damaging role played by hedgehogs, who eat the eggs and chicks of native ground-dwelling birds and consume large numbers of native invertebrates, including weta and skinks. More info about hedgehogs and why they are regarded as a pest species in New Zealand, can be found online: www.pestdetective.org.nz/culprits/hedgehog

A ‘peanut butter and jelly meat’ event was held on Wednesday 21st October. A group of volunteers helped cut up corflute signs into “chew cards” and filled the opposite edges of the corflute with peanut butter and jelly meat. We then distributed the cards around South lake at a spacing of 50metre intervals. Different pests chew on the cards and leave their bite marks which can be identified with the aim to get an idea of what pests are present. The cards were collected a week later and have been analysed by Jared at EcoFX. The results show that rats are likely the biggest issue around the lake with mice coming in second. There were a few incidents of possums and hedgehogs chewing the cards but these were to a much lesser extent. The project is now waiting to get trap boxes made up and the traps installed inside them before the boxes can be distributed around the lake.

A successful orientation walk around South lake occurred on Tuesday 1st September so that volunteers could get an idea of where they would be checking and setting traps. The weather was blustery and wet to start with, but that didn’t deter the participants who came along, despite having to scramble through blackberry and cross drains and fences. We are working with DOC and Waipa District Council to improve access around the lake for trapping in the future.

A community meeting was held in the Ohaupo Bowling club rooms attracting 14 attendees. Most were local to the Ohaupo area but some travelled from Hamilton and Te Awamutu. There were also representatives from Waipa District Council, Waikato Regional Council, National Wetland Trust, NZ Landcare Trust and EcoFX. DOC representatives gave their apologies.

Karen Denyer Executive Officer of the National Wetland Trust gave a brief overview of the National Wetland Centre – a major project based around the East Lake at Rotopiko. Native birds will be able to breed inside a protected fenced area, but once populations establish they will begin to migrate outside the fence. This where the community pest control work will be really valuable. Attendees discussed the different pests that posed a problem around the wetland complex, which to target, and the different methods of doing so, including trapping and bait stations. Jared Waters from the Otorohanga-based animal pest control company EcoFX brought some examples of different traps and bait stations for people to see. He also provided some pre-baited chew cards (for rodents and possums) for attendees to take with them, to put out around home or farm to see what kind of pests might be present.

The next step is to get a track around the South and North lakes for access to deploy pest control devices. The public were invited to a walk around the lake in September to explore the roughly formed route.